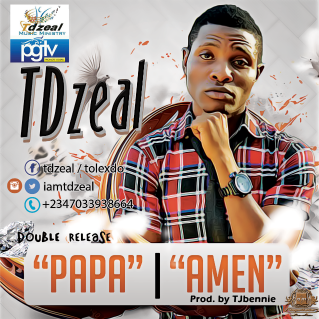 TDZEAL (Tolulope Ebenezer Soyemi) by real name is a young man born and raised in Lagos, Nigeria. Now an established gospel music minister, TDzeal is a Music Minister in Praise and Worship , Songwriter, and Musician pursuing his true passion of music.TDZEAL Has done few Tracks among other are “Without Your Love” and the latest one “Uwese Baba” which has blessed souls all over the world.

He has created a genre of music all his own which is Deep RnB Gospel Christian Music.TDzeal is known for his love and focus on blessing lives through his music and touching lives in both Worship and Praises and ministering in Churches and transforming souls…. now here to give u something deep and new

Amen” by TDzeal – This is clearly words of Prayer (like we can say IN JESUS NAME (AMEN) it’s also an expression of praise and also praying for our generation. His inspiration comes from God and also he also has role models among others are Don Moen, Tye Tribbett,Mark schultz, Frank Edwards, Kenny kore, Mike Abdul and Other Labourer of God’s Kingdom These Double will Break new grounds as it is the right songs for this generation, IT’S DEEP!Now you want it? You have it…

Get ready for the History that will be made “PAPA’ AND “AMEN” BY TDzeal (Produced by T.jbeenie‎)

TDZeal is the winner of Gospel Single of The Year 2015 at Top Naija Music Awards.