“Leave Story!! I Am Here To Stay” Says Mr Blaq As He Releases Another Single Featuring LKT Alaye. 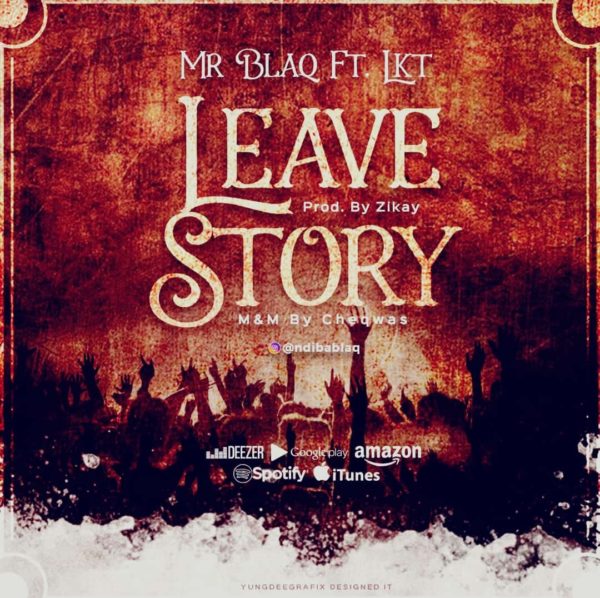 Mr BlaQ continues to dish out fresh music back to back as this is his third single since October 2019 when he released Afro-Pop’s shortest love song titled “Love You”. I would say that he’s trying to make a very bold statement here which is; “I am here to stay”

This new Song in which Mr BlaQ has featured one of Africa’s biggest Artist of all times LKT is titled “Leave Story”. “Leave Story” is a slang used on the streets of Africa to tell someone who you believe to be talking too much to shut their mouth. However, Leave Story by Mr BlaQ featuring LKT is generally a happy song because its more like; quit the talking (leave story) come here, step on the dance floor and party with me.

LKT who is a Nigerian London based music Artist came into limelight when he featured in a 2007 hit song titled Yahoozee by Olu maintain. He was the main sensation of the song because of his style and the song was well received around the world that even the famous American Politician and Secretary of State at the time, Colin Powell was seen in a viral video dancing in public to the song in 2008. Since then LKT has worked with Artists like the most popular twin musicians from Africa “P-square” on a song titled follow-follow which was also a massive hit locally and internationally among others.

Mr BlaQ and LKT are quite opposites of each other because they are of different roots someworth but similar in the sense that both of them often use their respective local dialect in delivering their Art thereby promoting the culture and African lifestyle to the rest of the world. They both have unique style, voice and energy which is what fuels the fire in this sound (Leave Story).

Regardless of all that has been said above, this song “Leave Story” produced by young and proficient producer Zikay is a vibe that will keep you on your feet dancing till the very end. There is no doubt in my mind that this song is a song that should be on every dance, party, happy mood playlists and the likes.

A big kudos to Mr BlaQ for this massive sound.