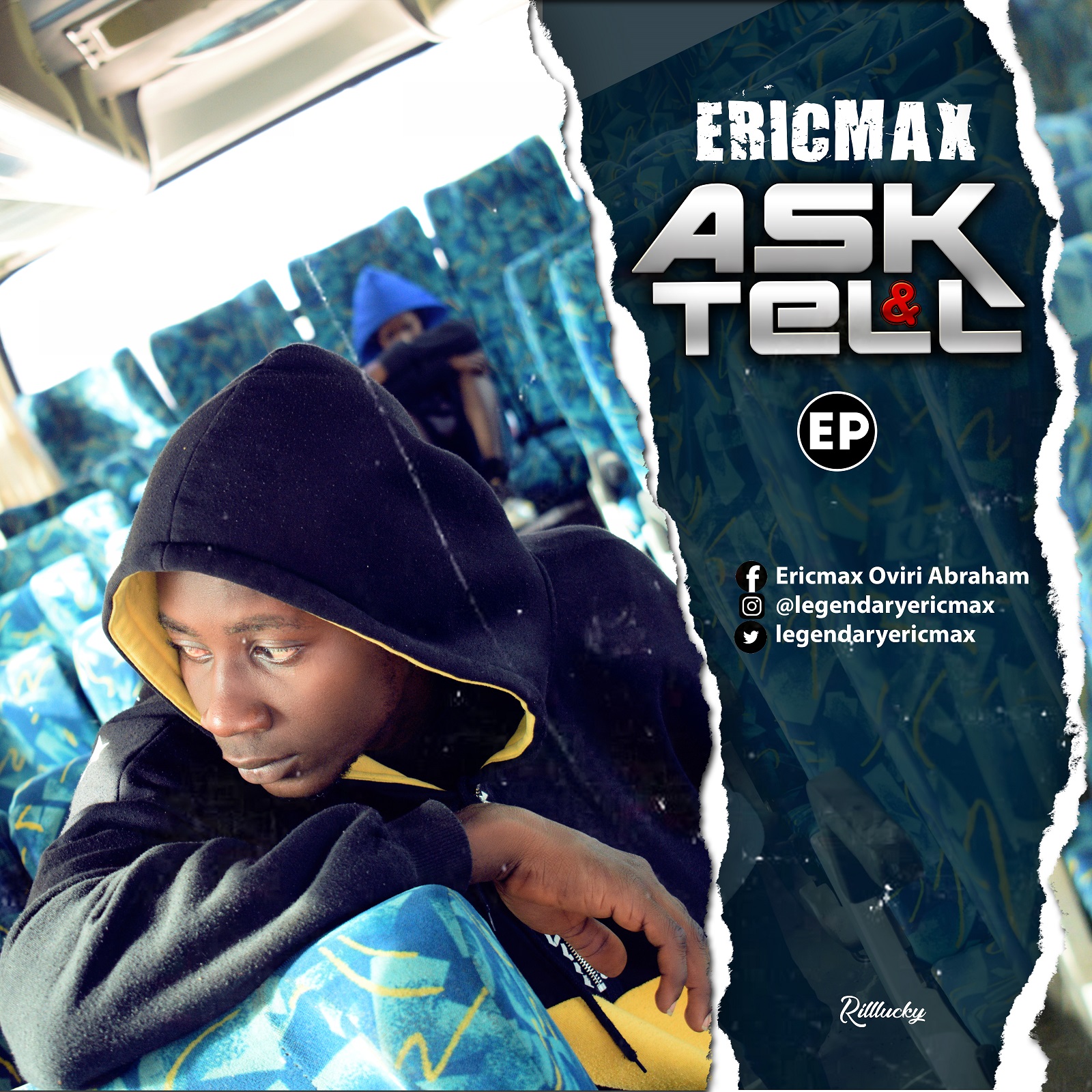 Ask & Tell is but a single step to many undaring footprints for Abraham Okeoghene Oviri, popularly known by his stage name- Ericmax or EMX.

A Delta born rapper and artist whose vision to rejuvenate a dying mother’s whispers to him of becoming the greatest of all amongst his blood puts him on a solemn but revolutionary journey to the pursuit.

He is an enigmatic rapper whose style, vision and lyrical model can be compared to the likes of J Cole, Nasty C, Kendrick Lamar, and the legendary 2pac Shakar.

Nevertheless, he is utmostly unique in flow and lyrical expressions. He stands out the most as a true storyteller – you never would get bored listening closely to a sea of conceptual lines of his.

After a couple of mixtapes in 2018 in which he solidified his confidence as a rapper; featuring the likes of Magada Christboy, Dr snow; and Mr. Moore on top the production deck, He comes out uniquely with his first-ever EP album which he titled “Ask & Tell”, with 6 songs in total making the tracklist.

In his first song which he titled “Legacy” Ericmax came out with a strong premise of his beliefs.

He started by saying that life is all about choice and he repeated that before he went in all hard on somebody….. Mr society.

This is such an amazing concept and eye-opener for 21st-century families. He simply made this clear in the song “legacy”.

With keen eyes set undetachable in the future, Ericmax made known his intention of becoming the greatest in his family in the song “journey of the six”.

He remarkably remembers those savoring confessions his mother used to whispers into his ears that one day he would be the greatest amongst them all.

Like Joseph in the Bible, he believed; and with a strong aura of faith in himself and in his ability to bring forth his late mother’s whispers, he embarks on a journey.

“We all know the struggles of a young king” sang on the hook by Kelz Nena in the song that gave the EP it’s refining title, “Ask&Tell”.

Ericmax also having his big brother, Termopeeda do a verse on the song alongside Kelz Nena continued from where he stopped on a reoccurring theme in the album – the journey to greatness. Though in a more broader light in “ask and tell”, he throws his elbows all out to talk about his journey thus far.

Also in Ask&Tell, he sents a shout out to those he started music with way back 2013 including Jane6ix, Yungludus, Christboy & westwizy, and also acknowledges his two closes friends “Foze & Benjamin” that they are going to be the greatest amongst his friends. How selfless is he!

God remains a strong factor to his growth as an individual. That’s why in “Kings Don’t Beg”, he preaches like a messenger that he is; to unrepentant souls to give back their lives to God.

He boldly proclaims that you either live for Jesus or you live to die meaninglessly.

Featuring Dr Snow, they both combined their lyrical forces to bring justice to God’s truth.

Next, is still about the main theme on the album.

In “Let Me Breathe” he admonishes young people to choose wisely in life; especially the kind of friends they keep.

For he believes there are jews and Pharisee everywhere in gentle clothing ready at every given time to nail people to the cross when they refuse to accept nominal and demeaning options.

His message in this song though diverse makes a lot of sense when you can simply find yourself to relate to the amazing story of himself and the journey he expresses.

Ericmax in his last song on the Ask & Tell EP narrates his constant fight with depression.

He made known that continual thoughts of losing himself never left his head, they haunted him like a ghost that haunts her killer.

But in general, he sends a message across to those who have never stopped believing in themselves and above all, in Jesus Christ to never think of giving up no matter how down the times might be – especially during depressed times.

Ericmax Ask&Tell EP is nothing but a phenomenon in modern times. Though just his first EP, Ericmax interest to change the Nigeria rap scene is without doubts shown in a brighter font.

Simply give yourself the privilege and honour to listen to the Ask&Tell EP.

You’ll never recover from its vibes after listening.

5. Journey Of The Six